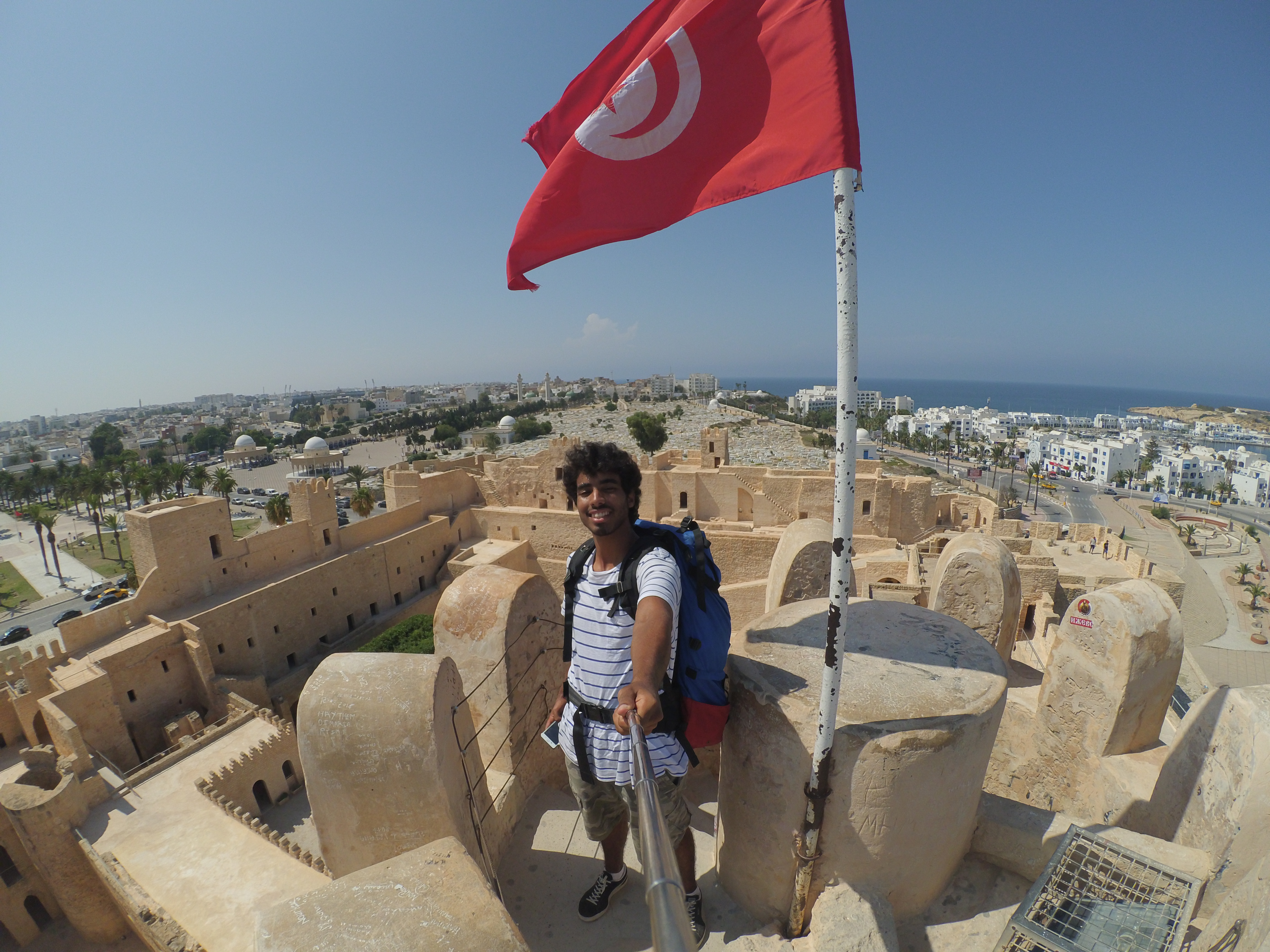 This idea was in my mind for a long time. I always dreamt about traveling to new places or going somewhere that I already don’t know, somewhere where I feel free, free from all of the daily basics and the usual routine. Discovering the world has always been on my mind so I wanted to start the journey in my own country and just know more about the place I live in.

Backpacking was my key, it is a form of low-cost independent travel. That includes the use of public transport, inexpensive lodging such as youth hostels and typically an interest in meeting locals as well as enjoying sights.

So, I made my plans, packed my things, gathered a lot of details and information to get myself ready for the journey.

Waking up feeling really inspired, my first destination was Tunis City ‘The Capital’ where I went to The Medina that contains around 700 monuments, including palaces, mosques like El Zitouna, mausoleums, madrasas and fountains. I stopped at a coffee out there, called terrace elBey, and enjoyed the panoramic view of the old city then I went to Habib Bourguiba avenue where The Cathedral of Saint Vincent de Paul and Tunisia popular clock tower. Also, I took the chance to visit my uncle’s house and eat lunch with them. In the afternoon, I went to Carthage city where I visited The Acropolium, also known as Saint Louis Cathedral and discovered the artful culture of Christians that was described in the decoration of the Roman Catholic church. It felt like I was in a time travelling machine that took me from a century to another and from religion to religion, I was stunned by how much cultures this city contained over the years.

Later that day, I headed to Sidi Bou Said, the famous and amazing blue & white town. It is located about 20 km from the capital, on a hill, with a view of the surrounding bay and the beautiful villages.

One of the views that left me speechless is this Sidi bou Said’s corner where calligraffiti decorated the village’s walls.

The second day, I woke up at 6 am, I was still feeling excited to continue my journey after I passed the night at uncle’s house. I went right to Beb Alioua’s station where I took the minibus to Zaghouan city. On the road, you can see the ancient Roman Aqueduct which supplied the city of Carthage with water from its source in Zaghouan while it flows a total of 132 km, making it amongst the longest aqueducts in the Roman Empire. So when I got there, I headed directly to the mountain where I found The Great Roman Temple of water and I passed some time out there, admiring the fascinating view and breathing some fresh air.

Afternoon has come and it is time to go to the next destination, which is Kairouan city but unfortunately I didn’t find any means of transport that could get me directly there, people told me to go to a nearby small city called EL FAHS and out there I can find a minibus that can take me to my destination. So I did.

I noticed that the mountain was the big obstacle between Zaghouan and Kairouan and I had to go around it. Anyway, after two and a half hours, I arrived to the Aghlabids city, passing by the Barbier Mausoleum and going to the Medina where I found The Great Mosque of Uqba, one of the masterpieces of Islamic architecture. Huge works gave the mosque its present aspect, in addition to its spiritual prestige. This Mosque is one of the most impressive and largest Islamic monuments in North Africa and it is one of the oldest places of worship in the Islamic world. So I took a tour there and some pictures then I went to a youth center, where I could find an accommodation and get some rest. However, I accidentally found a basketball court beyond and I couldn’t stop myself to go balling. At night, I took a walk in the city and bought some food and that’s how I ended my second day. Well, it didn’t really end as comfortable as I wanted it to be because of the mosquitos that didn’t let me sleep.

This third day was a little bit challenging because I got to visit three cities before ending the day. So I took the minibus as usual and left Kairouan city behind, going to Sousse. I headed to The archaeological Museum that is located within the Kasbah (fortification) of the Medina. Where I discovered the monuments of the Sahel region from the Antiquity to the Muslim period. In the afternoon, I went to Monastir city where I headed to Mausoleum of Habib Bourguiba and The Ribat which is an islamic defensive structure that is still in good conditions until this day. After a little tour out there, I went to the train station and hit the road to the next location: Mahdia aka the most gorgeous city in the tour. I felt like home out there and it really looked like my hometown Bizerte in so many ways.

My journey did mostly depend on my cell phone as it helped me follow directions with the Maps application. Unfortunately, this time it screwed me up: I was planning to spend the night in a youth club as usual but when I got to the dedicated place I found that the building is still in progress so I started to search for a solution. People told me that there is some cheap hotels in El Medina, I started looking for them until I stumbled upon el “Skifa el Kahla”, a massive fortified gate from the Fatimid Caliphate. It is used like the entry of el Medina so I passed through it and resumed my seeking for like 15 minutes until I found a nice little hotel. Unfortunately, there was no single room available so I had to go all the way with the double, I didn’t regret it because the hotel is located between the old city and the sea and my room had a sea view. I couldn’t stop myself from getting down there and take a dip in the clear waters after a long travelling day.

Fourth day in the journey, getting up early, packing my stuff and hitting the road. The assistant of the hotel told me a lot about the town and one of the places he mentioned was, Bab Bhar (fortification fatimide). So I wanted to check it. I run into a cemetery that is located between a lighthouse, the historical monument and the sea. I did enjoy a spectacular view while standing at the end of the small peninsula, at the foot of the stronghold, the white graves following one another towards the turquoise sea and they all pointing to the same direction.

Thus, the next destination is El Djem town, home to some of the most impressive Roman remains in Africa like the world-famous “Roman amphitheater of Thysdrus”, one of Tunisia’s finest historical monuments. I was lost in its halls admiring what I was seeing and daydreaming about what happened on these flat grounds back to the Roman era.

From El Djem to Sfax, the second largest city in Tunisia as known as the capital of south. I wasn’t planning to spend much time there, the main reason was to get a little ship that can take me directly to Djerba but unfortunately the company was out of service which cost me a lot of wasted time between searching and moving from place to another. I was planning to be in Djerba by the end of the day but it got tougher so I had to do something about it. Therefore, I went to the transport company, they told me that there is only one bus that goes to Djerba that was at midnight and that’s something I couldn’t do as it was too late. Then they told me about another bus that arrives that time to Sfax and can get me to Medenine, a city nearby to Djerba. Nothing to do but to go with it and after 3 hours and a half, I arrived to the town at 7:00 PM hoping that I can find a minibus that can get me to Djerba and I was lucky with the last one. 10:30 PM I got to Djerba, to my uncle’s house who welcomed me to the city that I was born in.

Two days in Djerba that passed expeditiously. First day was meeting with the family that I didn’t see in a while, enjoying the hot weather, the sandy villages and the traditional lifestyle. Swimming and chilling at the beaches where all you see is sand, water and palm trees.

On the second day, I went to Djerbahood an amazing art gallery, which was located in a small village called El Riadh and it was a street art event in which artists from all over the world gathered there to create this creative and spectacular art form even though some paintings got corrupted by time but it still had that inspirational feeling. As a Bboy, I thought about making something that mix breaking and graffiti to show the dope combination between those 2 elements of Hip Hop Culture and show that hip-hop in Tunisia is still alive and the movement is still proceeding.

So after an hour of shooting, I went to another religious location called El Ghriba. It is the oldest Synagogue in Tunisia. Besides being the center of the island’s Jewish life, it is also a site of pilgrimage.

By the end of the day I went to a cyber-place, to do some stuff and check the footages of the trip and it was a really big mistake! The computer that I used has corrupted the camera’s sd card and all my data of pictures and videos that I captured during the entire journey was gone. That screwed me up but I kept on going.

Going Back to Medenine to pass two days in Beni Khedache with my cousin discovering the low sandstone mountain chain of jbal Dahar. There is little vegetation, consisting of lucerne, thorn bushes, and the occasional palm tree, giving the landscape a lunar appearance.

I was planning to go to the southwest but they told me that there is no direct transport and I need to go back to Gabes to pick another bus moreover it’s the only bus also I got to catch it so early at three and half in the morning, those things made me think twice according to my low budget plus the lack of transport and the high temperature.

So I decided to end the trip here. But, I didn’t give up on that Djerbahood project. So I went Back to djerba in the ninth day and bought a new sd card and filmed the video.

As well as when I got some time left, I went to the crocodile farm where I passed time observing those reptiles.

The end of the journey! The last day was based on a 12 hour-trip on the bus from 6am to 6pm and getting home made me really happy knowing that I can finally rest.

This Journey has showed me a lot of things, things that we don’t see on TV or internet. Especially about our country, Tunisia, that everybody, nowadays, think about quitting it.

All the unforgettable places such as nature, historical sites, cities and all the beautiful people that I met…I can’t really describe or name all of those unbelievable things that happened and those astonishing, breathtaking moments.

What a wonderful World!

Mohamed Ali Jelidi aka bboy Kali from Virgule crew. A dancer who is influenced by the rhythm of life and sound.