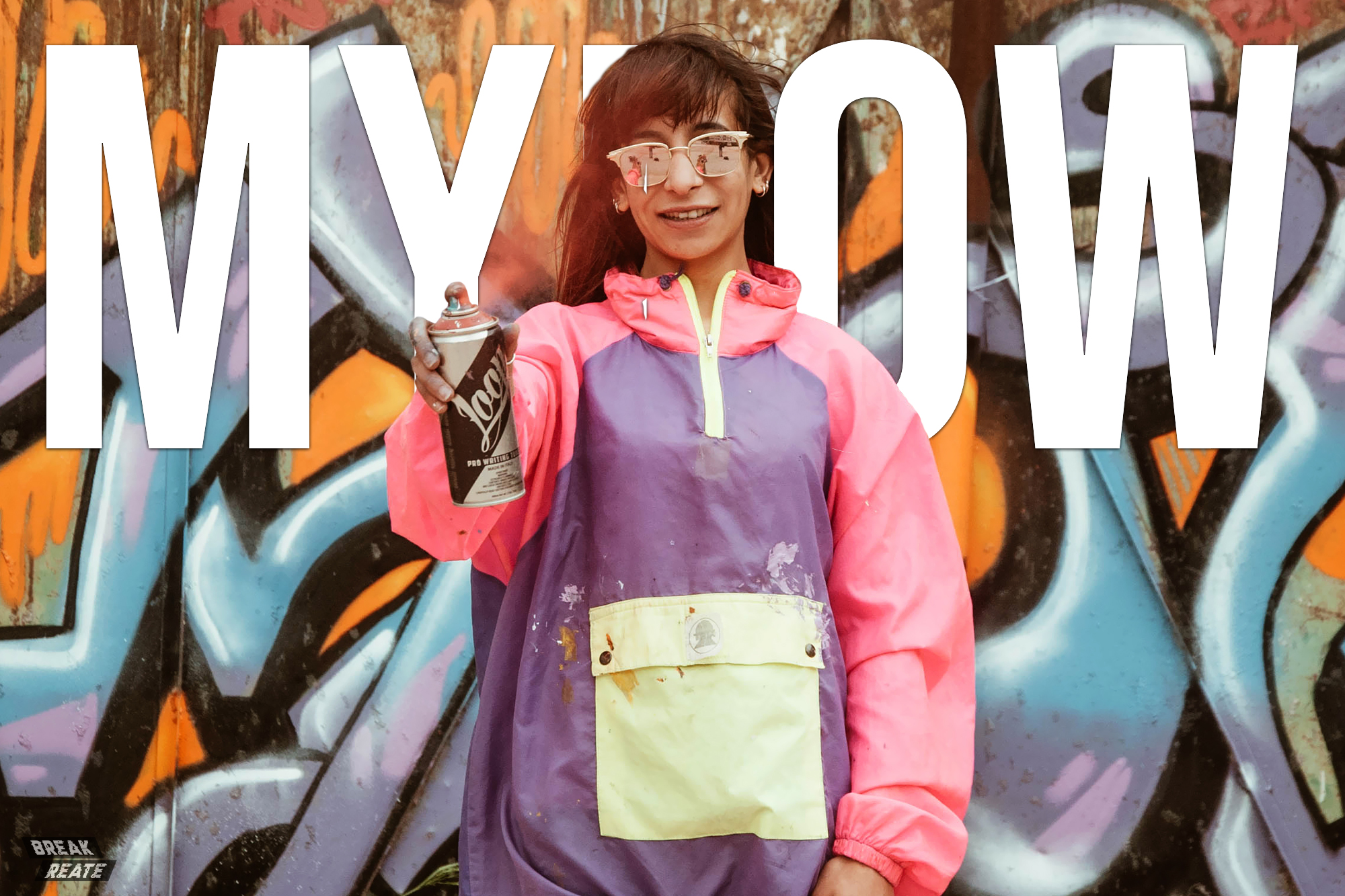 You’ve probably seen the bubble letters and different colors that decorate walls, poles and abandoned surfaces almost everywhere. This blog is all about Graffiti presenting one of its many artists: Amel Neffati, also known as Mylow, a full time graffiti artist.

Mylow’s passion started since her childhood and evolved later from random drawings on the wall as a kid to professional graffiti masterpieces. Growing up and having a dream of becoming an artist, it wasn’t simple. As every female who chooses to be independent, she had to face her parents and try to explain her choices. Despite every obstacle, she was able to prove her point as an artist.

The artist also considers ethnic, African, Islamic and underground art as a few of her inspirations. As well as the urban culture, history, music, fashion and Hip-Hop movements. Inspiration is what’s most important for an artist and Mylow makes sure she delivers new ideas that show progress and determination for the thing she does. Amel’s journey began in 2008 and has been flourishing since then.

She went from studying law to making her own on the streets and that’s when she decided to shift her academic journey by studying design instead. She started focusing more on different graffiti styles as well as doing portraits of Tunisian women with afro hair. Being a female herself in a domain best known for its male dominance, it wasn’t as easy as it seems. The artist took risks and rebelled against society standards while practicing her art.

Mylow believes in the freedom of art especially when it comes to street art. She cherishes every experience she goes through as someone that’s working hard to achieve multiple missions being a Graffiti artist of this generation.

Mylow hopes for a brighter future and a tighter community to share and learn from each other’s experiences. Her vision of a real space for the community is all about expression and art. She is aiming to provide support and guidance for those who are ready to dive in deep into the artistic world and its different forms.

We interviewed Mylow and here are some Q/A’s to discover her more:

+ How did you get into the Graffiti culture?

My story started with graffiti a long time ago since I was 5 years old considering that I used to paint on walls with the stencil which is a graffiti art form as the name of graffiti refers to in Greek. I remember my mother giving me the balcony of our house to paint all over the walls; cartoons, messages, things like that. But at that age I never thought that I will develop this form of art to become later a graffiti artist.

I was introduced to graffiti by a crew called “nd2 crew”. And the person who believed in my talent was Droom; a graffiti artist. I started sketching and watching videos and the guys practicing graffiti on the walls then I found myself trying my first sketches. At the very start they weren’t that good, but with persistence I got respect and developed my pieces. Then I was discovered by some international festivals that happened in Tunisia and since then I was known as the first female graffiti artist in Tunisia and I suppose in North Africa too. It’s a title that I try to represent and raise its level in every occasion.

+ What helped you develop your skills in Tunisia?

In Tunisia, I believe that we are far from being disturbed by law or anything since we don’t have a big number of writers or a law that’s frankly against us. So we still can do graffiti and be smart about the choices of the walls. But this small number of real writers is not a good thing too. I think we are just living the 80’s of Graffiti. It could be a bad thing only if we don’t know how to deal with it and progress better than any country in the world did with the Hip-Hop movement. Being conscious and positive while learning from others’ past and present mistakes is necessary to make a better history and a better movement. In my experience, what really helped me progress is, sharing with others, learning from them, giving back knowledge and opening my mind for different cultures: Starting with mine; the African identity and keeping up with the world’s graffiti movement. Exercising, challenging myself “go big or go home”, trying to be authentic and doing things as the first not only being the best because it’s not what I want to be. Therefore, I helped people around contributing as a Graffiti artist in my own community.

+ Define your mission as a graffiti artist:

Being a graffiti artist for me is already a mission; giving birth to walls that speak for me, for the country’s streets and for anyone who notices it as a witness.

What I want to reach? Being well known not as a skilled artist because I think everyone can get that with hard work. Therefore I don’t see that enough, I think memorizing history and being part of it is my first mission. The messages that my work embodies is my state of mind and the way I see the world. As an artist, I think we all should tell the truth about the world we live in and try to bring innovations and possibilities, also live things that not everyone has the time to think about. Always pushing further and always questioning ourselves. I want to stay true to the nature of the graffiti movement and still innovate as much as possible. It’s like being between Babylon and Utopia.

+ How does your name define your graffiti identity?

What defines my graffiti’s identity is my style; a fusion between letters and portraits, being persistent, vandalism, innovation, challenges, emotions, boldness…

About my “aka”, it’s just a nickname that my friends proposed in which I turned “law” into “low”. “Law” as me making my law in the streets and “low” as being here down on this earth, it reminds me that it’s possible to be low and bring the power of my law at the same time

+ What was your first graffiti artwork and where did you paint it?

My first graffiti work was “FREEDOM”, I wrote it against my apartment in front of the Neighborhood’s school dressed up like a boy and for that I remember buying small cans that did back then coast me a lot and didn’t help me finish the graffiti because of the insufficient quantity.

+ How many graffiti works have you already done?

Too many that I can’t really remember since I don’t take pictures of all of my work as every writer does.

+ How many Hip-Hop events have you been part of? (Name them if possible):

+ What is the main process you go through as a graffiti artist from the idea to tagging: How do you get inspired, choose your artwork locations, etc… :

For the ideas, I start with searching on subjects and art movements, questions I think about and want to know, develop knowledge and new graffiti artworks most of the times. Inspiration comes from thoughts masked on my unconsciousness that come to me and I try to develop them and think about the possibility of making them come true through my graffiti. After that I do the sketch, think of my colors, see what spray cans I got or buy some if I need to then remember spots I saw in my daily life then I pick one in my mind and go achieve my vision on that wall I chose.

+ How does graffiti art and being part of the urban and hip-hop community impact your life?

It tells all about me; the way I think, always being fresh, open minded despite all differences and close to my living and motivation, being a human in this world.

+ Describe the graffiti scene in Tunisia in 2 words?

+ Name 2 to 4 main challenges faced by the graffiti artists’ community:

-The new laws of the street artists that are going to put the community under control once agreed on.

-The absence of commitment to this form of art.

-The passing between generations and artists.

+ What are your hopes for the next generations and how do you think we all can reach them and impact their lives?

I hope for the future generations to be more orientated knowing how to get started in the field of graffiti and how to self-promote around the world. To look for new people, friends of friends within the community. How to help them? By sharing experiences, to try to create a communication, to collaborate, to give ideas and possibilities of progressions and to offer opportunities when there are any.

+ What was your best moment as a Graffiti artist? :

My first appearance with well-known graffiti artists and the fact of creating my first graffiti wall inspired by the Berber/Amazigh culture ranging from lettering to drawing as well as the best portrait I have ever made of an afro woman when I just start to paint portraits in a couple of hours.

+ Tell us a cool story about you:

Every story I live is a cool one to me.

+ Introduce your project if you have one:

Well I am working on the second edition of a Hip Hop urban art festival “Urban Why’z” which is a festival that shows various forms of art from graffiti, dance, music, skateboarding. For my personal projects, I’m preparing graffiti tour in Tunisia next year.

+ Anything you want to say to the readers:

Graffiti shows a new perception of our daily lives and helps us be creative and positive, it introduces us to other communities and civilizations and keeps us updated to the stories that we all share in real life as well as in the digital world.

Member of breakreate. Born in May 15, 2003 in Bizerte living in Nefza. I'm an editor, music writer and a culture and arts enthusiast.