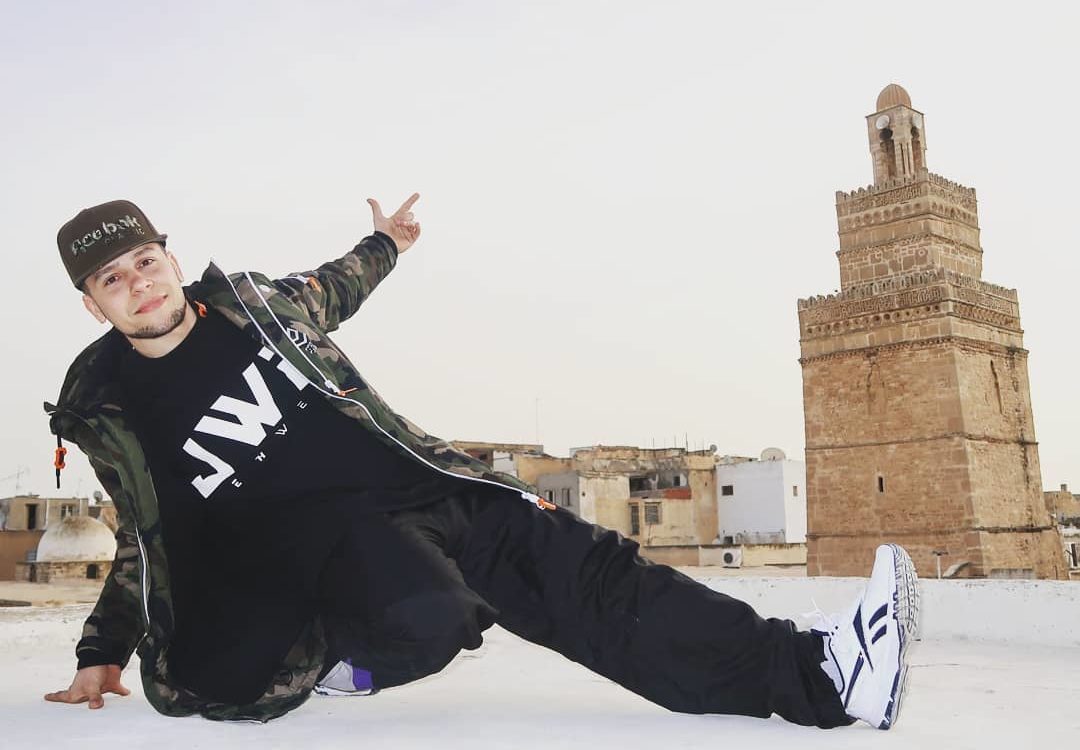 One of the truly hardworking people and the kindest one of them who is also a member from the Urban Bboy crew from Sfax becoming a judge at Battle of Est, an international dance event held in Estonia. Meet Wissem, a Bboy, a breaking teacher and a currently a Social Media Manager at Free Flow in Estonia.

Wissem Jalloul also known as Bboy Diehard, started his journey as a Bboy back in 2008 in Sfax after getting interested in the dance through a TV commercial called “Break w Dima Yemchi” made by Upper Underground Crew (a crew from Tunis). “I started searching in my local city, Sfax, for a breaking group in youth centers, etc. and I ended up joining Urban Bboys which was named Free South Crew in that time (2008)”

He believes that his love for the dance the key to succeeding in it and that is how he got his name, Diehard. “I named myself Diehard because I was always trying to know every detail and corner about breaking like a diehard fan who collects all the action figures and latest news of his sports or the art that he loves.”Diehard also believes that working hard is also another key to this dance or anything else in life. “Also the word diehard has another meaning which is not stop trying until you reach your goal.Let’s say it’s like an oath to myself.”

Wissem’s goal in life is pretty much simple but really wise and motivating where he aim to becoming a better person through his art and to make his art better through becoming a better person. “My future goal is to spread more love and share with as much people as I can meet this culture that we all appreciate” and I can simply confirm that. He is just an easy person to approach and talk to and the one of those people who will make you remember that communication is key.

We interviewed Diehard and here are some Q/As to know more about him:

How did you make your way in becoming a respected Bboy in Estonia?

I made my way in Estonia scene not with battling or winning events. I made my way to the Estonian scene through what I see more fitting my vision and perspective, which is communicating in jams cyphering, teaching and exchanging.

What are your thoughts on being a breaking leader in Estonia?

I would like to give the opportunity to the next generation to get a better information and a place to express themselves. It has never been easy for us to get to battles or to get workshops in Tunisia so I am trying to give what I can at the current moment to the Estonian Bboys since I know what it means when youdon’t have chances.

Do you have any future ideas to stat a project?

Future project is to link breaking scene of Baltic region to Tunisia and vice versa.

What are your thoughts about the breaking scene in Estonia?

The breaking scene in Estonia is evolving throughout the years and there is a great upcoming generation that will make that region known in the bigger scene.

What are your thoughts about the breaking scene in Tunisia?

I have been following the breaking scene in Tunisia the past 3 years and I can see that there are people who are connecting and uniting to do better things for the culture there. Therefore, I am optimistic for a better future in the upcoming years.

Who are your top 3 inspirations in Breaking?

What inspires you while evolving your style?

What inspires me is finding my energy through this dance and expressing it to the fullest.

The Philanthropic Battle: A Dance Celebration of Womanhood