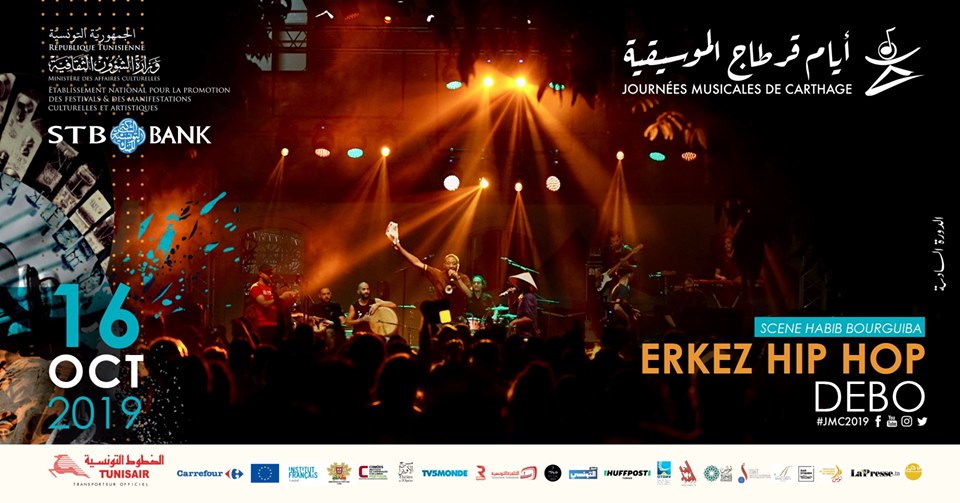 A weekday’s 5 pm is usually energy-draining unless you get entertained on your way back home!
And what’s better than a live concert taking place in the heart of Tunis city?

On Wednesday, 16th of October 2019, Habib Bourguiba avenue will host Erkez Hip-Hop, an atypical fusion between Rap and Mezoued, as described by its producers, DEBO Collective. These two different music genres will merge and invade Tunis downtown streets, taking the audience to an enriching creative experience.

As a part of the Journées Musicales de Carthage (JMC), Erkez Hip-Hop ‘s varied audience will get to connect with some of the best live performers: Massi, Vipa, and Tiga.
Moreover, the stage will welcome multiple musicians that will accompany the three uniquely talented rappers: Youssef Soltana, Marwen Soltana, Homs, Babboucha, Walid, Montassar Jebali, Ayoub Rekik, who will be playing diverse instruments going from guitar to Bendir and Mezoued, delivering to the crowd some purely traditional sound waves mixed with Hip-Hop music.

The project brings together Tunisian artists from two different music industries that are Hip-Hop and Mezoued, aiming to create a cultural and artistic exchange platform. Erkez Hip-Hop will result in the release of a thirteen titles studio album, making it a must-attend show.

Save the date! Wednesday the 16th of October 2019 in Habib Bourguiba avenue. Find out more about Erkez Hip-Hop here.

Stef Euphoria: The Making of an Artist