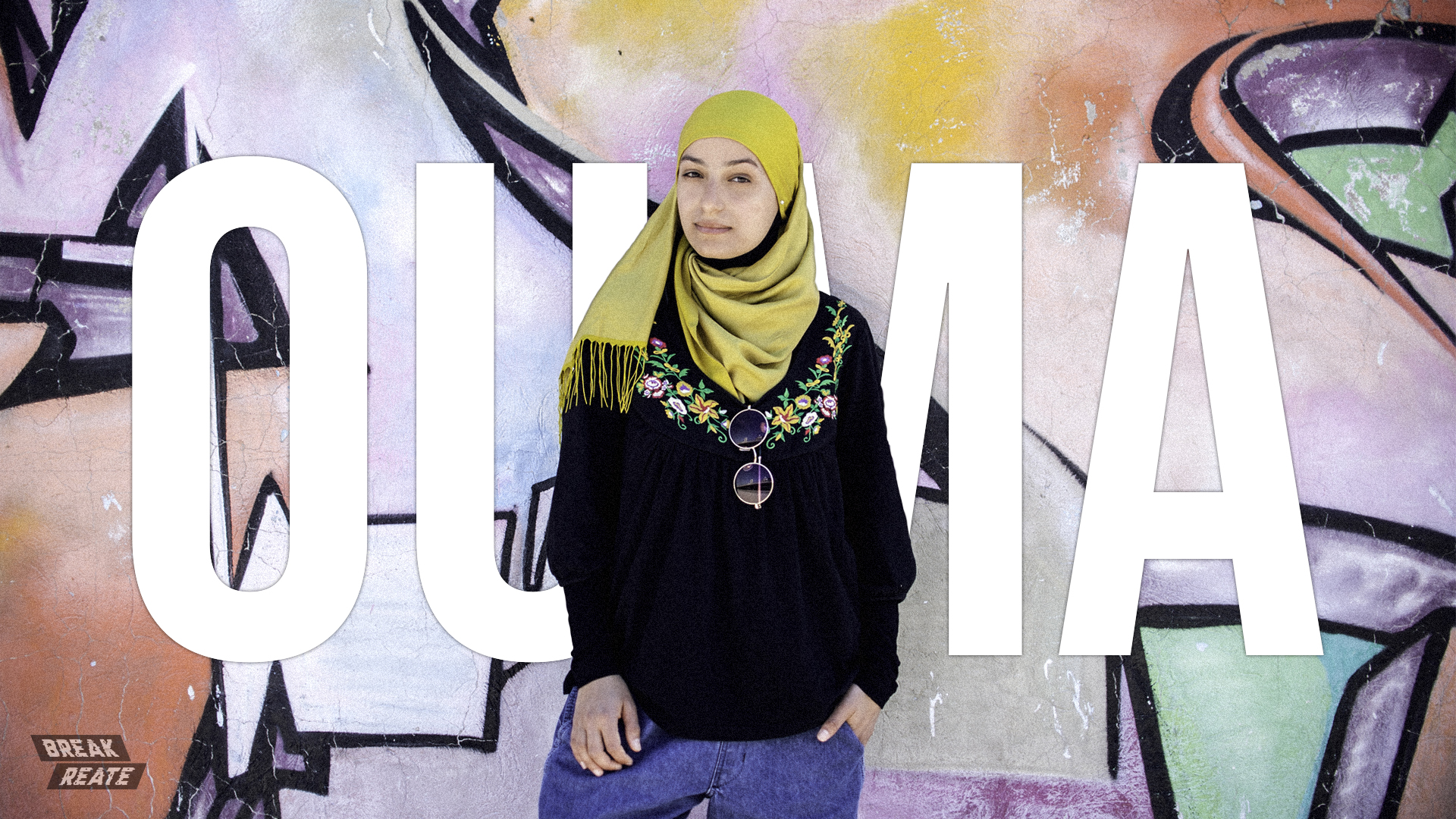 Ouma, the young Hijabi graffiti artist based in Sfax, is strongly committed to changing perceptions through art and associative projects. Being an active artist as well as a project manager within a mission driven art association, Art acquis, in Sfax, she has also launched her own clothing brand « Ouma Store » in early March 2018.

Ouma has joined the street art community right after the 2011 revolution. The young energetic woman recalls those days with a smile on her face.

«For me, it was really a total freedom. I knew I was able to do whatever I wanted. So, I bought few spray cans and tagged my first graffiti work. Which was in my high school, I have just wanted to leave a mark there before leaving it as it was my senior year. Then, it became a habit, I couldn’t stop. »

During this decisive period, the artist used to live in Tunis where she shared her first graffiti works and accomplished her Art studies’ dream. Once her family moved on to Sfax, Ouma continued her studies in Fashion design and modeling until 2016.

Tagging as a young Hijabi woman

In Tunisia, graffiti is still a poorly known art form and less appreciated than others.It’s a discipline that has especially been established since the revolution, even though there were already some graffiti artists. In addition, sharing one’s art with a crowd in the streets was an unusual thing for a woman. Ouma was then often confronted by a misunderstanding from her audience once she starts tagging in the streets. As she laughs, she shares with us her experiences and the reactions she has received.

«Last time, I was in Tunis to tag and I admit it was vandalism. There were policemen who couldn’t believe their eyes as they approached me. When they found my address on my id card, they asked me ‘But you come from Sfax to buy spray cans that cost you 20 dinars per item to just tag in this place ?’ They didn’t understand. They didn’t know how to react, all they could see is a girl who’s also a hijabi tagging on the walls. They then told me ‘You’ll be forgiven this time, but make sure to not repeat this, okey?’»

Sometimes people who pass by Ouma while tagging, ask her about the artists who made the graffiti, as they usually believe there’s a team behind it, not only her, the Hijabi girl.

She has performed with the graffiti artist « Ogre » in a small legal street that is located between an Arab district and the main touristic street of Belleville, in Paris. During the performance, she remembers the inhabitants who were offended by watching her tag in the streets and who commented her behavior.

The young artist doesn’t take these reactions personally, but she declares that this is exactly among her objectives: “Being a Hijabi is not a limit.”

The idea of standing in front of a wall already shocks certain people, she explains. Through her presence in front of walls as well as her graffiti works, Ouma pushes the spectators to widen their horizons and think differently.

The artist started representing the Tunisian women’s diversity through many Graffiti artworks around the country within her own project. She tries to visualize each region’s specificities as well as the women belonging to it.

« I think that the Tunisian woman is colorful. We are so divers, and we can hardly put all Tunisian women within one category. There’s multiple examples of the tunisian woman. »

In Djerba, Ouma’s graffiti work presented a local woman who’s strongly attached to her cultural heritage and traditional clothing, constantly striving to highlight them. She also shared a work in Louza, a small village located at one hour from Sfax. It’s a beautiful yet neglected region where she did highlight through her work a woman wearing Niqab with a focus on her beautiful eyes.

Since the beginning of her street art journey, the artist participated in events and in associations’ projects as an artist, through graffiti performances or design courses.

As she finished her studies by the end of 2016, she had more free time to become active and start an association with her friends, « Art acquis », which is a mission driven art association that leads artistic projects with a real sociopolitical impact.

Within this organisation, the artist manages the « Now’Art el Houma » project, a name that combines both Arabic and English meanings: (« Now-Art » within the neighborhood) and its equivalent in Arabic that means (the neighborhood’s «  flower »).

The project is located in a small popular neighborhood in Sfax, Hay la Hbib, consisting in the installation of a collective garden, a collective vegetable garden, selective bins and the creation of art clubs dedicated to kids. At the end of the project, there will be a big festival featuring artistic performances as well as the kids’ participations. The project cultivates environmental awareness through art.

And you can also find more about her store and check her brand through its pages here: Facebook // @ouma.store

A Bboy’s Backpacking Journey around Tunisia