Have you ever wanted to know more about DJs from our country? Especially the DJs who are more into Hip-hop? Then, this is the right blog series for you. “el Diggers” will highlight some of the DJs from Tunisia and let you discover them.

Our first pick is DJ Rach. Rached Toumia aka Rach, a 27 year old DJ coming all the way from Monastir. He is a member of one the most known Bboy crews in the country, which is MBF Crew, the “Aokkous”.

The first time Rach discovered hip-hop was through a music video of the classic song “Freestyler” of Bomfunk Mc’s in 2001. “In that period, I used to hang out with my older brother’s friends from a time to time and most of them were into hip-hop and they showed me the first Bboying moves.”

Yes, Rach is a Bboy as well. In fact, he was one of the co-founders of his crew. “I first met my best friend Moncef and we started practicing together and then the rest of our friends came along. We used to meet and practice in the train station and we became spontaneously a crew.”

For now, Rach is not breaking as he used to. He is not so serious about it anymore after he had two surgeries on his knees. “It became a bit tough to endure all the stress because of health problems. But Bboying is still and will always be a part of me.” 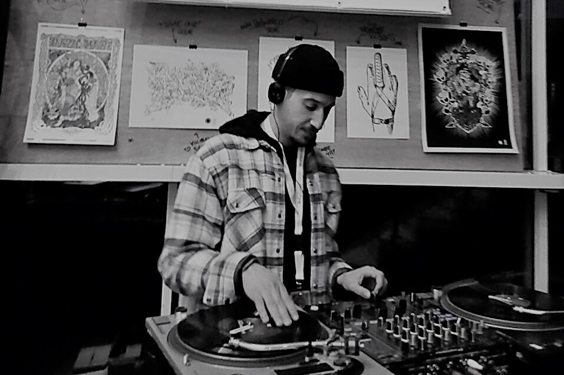 Rach took the win in a few breaking battles even though he was not really into competitions. “I like cyphers more.” He won “Battle of the year 2007”, “Bboy street battle 2010”, “King of the cypher” (2vs2 and best cypher Bboy), “Circle Evolution” (Crew vs Crew and 1vs1 footwork) and “Marboogie Battle”.

However, even though Rached stopped breaking as he used to do, he is still into hip-hop. Rached became a DJ too! That is how I personally knew him, a DJ in one of Art Solution’s events. He started DJing in 2013.

Here are some Q&As we did with Rach so you get to know him more:

~How did you get into Djing?

Searching for music was always a part of my life even in the breaking days I felt like music is the key for a creative practice. Then when I first had a surgery on my knee I was obliged to stay at home and not go to practice and it was depressing. That´s how I had the idea to buy turntables and a mixer and started learning how to scratch so I can go forward. Since then, it became an obsession and a daily ritual.

~What is your biggest inspiration in life?

~Who is your biggest inspiration in Hip-hop?

To be honest, I have a crazy creative circle of friends (DJs, Beat makers, Graffiti writers, Bboys, Rappers and Video makers) that inspires me on the daily with their art.

~What is your best memory as a DJ?

I must say that DJing is not what I do for a living (huge respect for the Dj´s who make a living out of this Artform) but I try to put a lot of time and energy into it. That is why I enjoy every single moment of playing music and spreading good vibes and try to make a best memory of the moment. One of the highlights was 4 months ago when I did the open show on Afu Ra´s concert and that was a good opportunity to show my skills in front of strictly hip-hop crowd.

~Who is your favorite DJ and favorite Bboy?

It is hard to say who is my favorite DJ because there are many DJ categories (Battle DJ, Club DJ…) but I have always been fan of the Beat Junkies and DJ Mr.Thing. My favorite Bboy is Rabbani from Holland. I would say that he has the most complicated simple style I have ever seen. His flow is just magic!

~What is your favorite track?

Doris & Kelley – You Don’t Have To Worry.

~What music do you enjoy listening to besides hip-hop music?

~How do you choose the music you play in Events?

It depends on where I play and for which kind of crowd. However, the most important thing is that I play music that I like to listen to and try to take the crowd in a musical journey through my world.

~What are your advices for beginner DJs?

Take your time to understand the essence of DJing and practice hard before you start talking about Gigs and Cash. Be open-minded and do not miss any opportunity to learn something new.

~What do you think about the Tunisian hip-hop scene?

I think the scene has been growing up step by step in the last 2 years. However,I can’t really say in which way because I haven’t been in a jam in Tunisia since 3 years now but I hope it is going in the right one.

~From your perspective, what is the reason that is stopping the Tunisian Hip-hop community from evolving?

As we all know the scene can grow only through jams. I think the lack of taking the initiative of doing own projects is the main problem of the Hip-hop evolution in Tunisia. Most of the crews are waiting for the government or promoters to organize (big) events but I think it is more important to organize small jams and bring all the elements together to push the level higher and higher and then everything is going to come together.

~If you had the ability to change on thing about the Tunisian Hip-hop community, what would it be?

Show respect and learn how to appreciate and support each other for the good of the community. There is a high potential in Tunisia and many people are practicing really hard and bringing new energy to the scene. However, the missing point is the support and recognition from the rest of the community.

Rach’s last words for the interview:

“Thanks for Breakreate for the interview and keep doing what you doing! I want also to thank all the homies that are showing me daily support and peace for all the Tunisian Hip-hop community.”