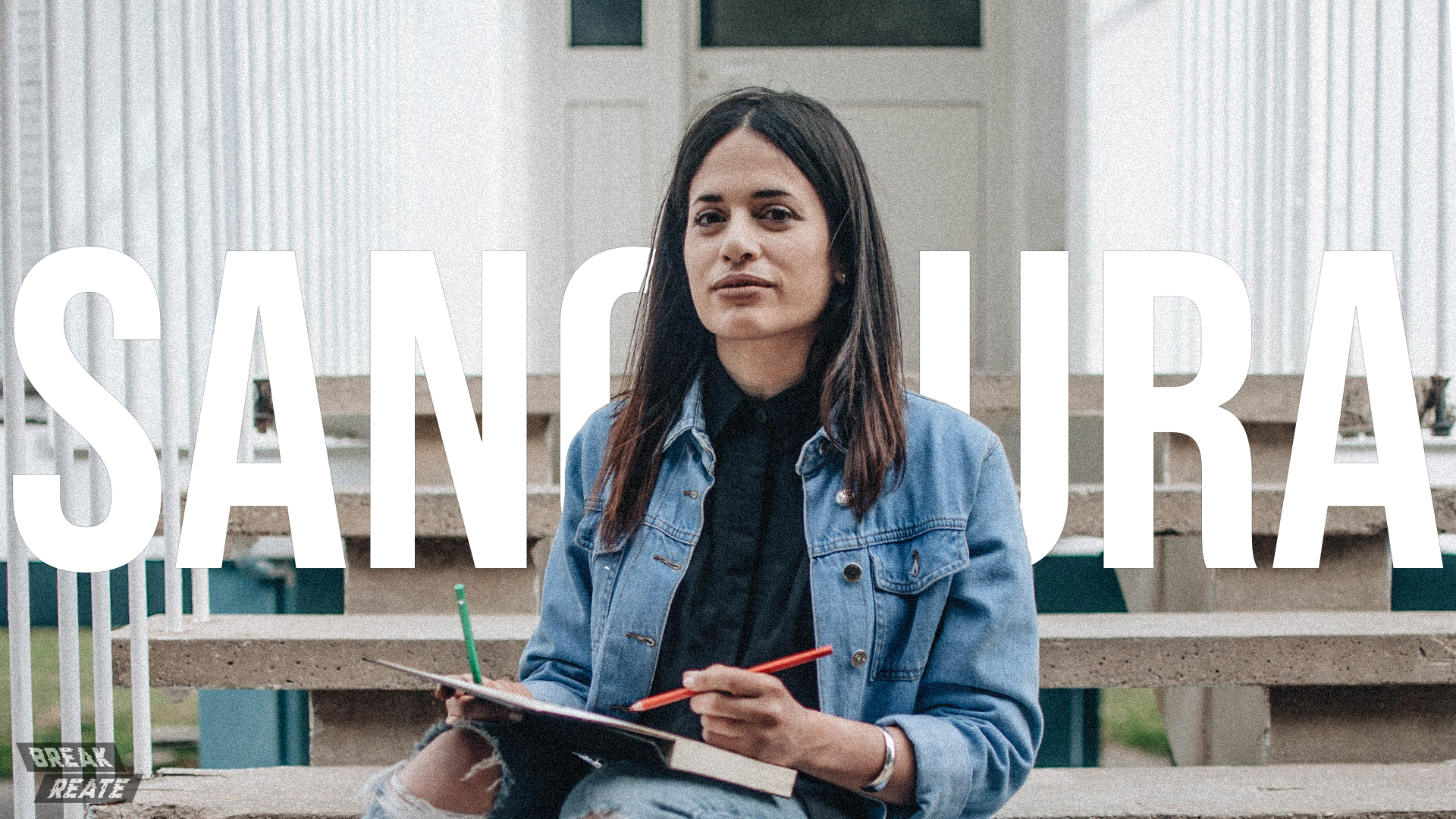 Rebel at heart, the artist “Sangoura” lets her work be inspired by, and criticizes the daily struggles of women in Tunisian society with humour. Whether it’s the way to dress, the difficulties in the professional and personal life that women have to face, to talk about where we can or cannot talk, Sangoura faces it in a funny way. Through her work she promotes the empowerment of women in everyday life, freedom of expression and criticizes constraints.

“In Tunisia, the woman is expected to remain silent. To speak as a woman is ‘3ib’, it’s not acceptable.” Yet the artist does not let her critics silence her and her work.

Having studied design and product, Lamia Mechichi created the character “Sangoura” in 2011 which stands for “the one who captures quickly and critically”. At first, it was a concept of political satire, but through her career, the artist turned to other social topics, that are no less controversial. After graduation, she entered several creative collectives, where she designed and sold T-shirts and more.

At that moment, she would not have dared to go down the streets and express herself through street art. The artistic influence in this sense for her was the graphic artist, graphic designer, illustrator – and more recently actor – Vajo. When they met, Vajo was selling T-shirts he had designed at the Abdellia Palace, and she started talking to him about their common interests and ideas. The artists left to the U.S., but when he returned, they launched the Leblebi Store together. The concept was to combine funny Tunisian proverbs with a funky street style. The collaboration with this avant-garde street artist influenced her in the sense that she herself began to dare to go down the streets and spread her art on the streets.

In May 2017, she participated in a collective exhibition “230” on the article of the Tunisian criminal code that criminalizes homosexuality organized by the organization “Chouf” to celebrate the International Day against homophobia, transphobia and biphobia (IDAHOTB). For this exhibition, she created a painting with two women who have an adopted son to thematize homosexual couples who have children, something considered a taboo in Tunisia.

Meanwhile, she was involved in comic art collectives, such as the collective Koumik, which was later transformed into Lab619 – to which she contributed since its second edition. The last (9th) edition was the result of a workshop on identity/ies and was presented to the public in an exhibition in December 2017.

The tribute to her father

From an early age, Mechichi loved to draw and scribble in her spare time. Her father was a big supporter of hers in this and always used to joke about her just having copied it from somewhere. Yet he was her biggest fan from an early age.

In 2016, her father passed away after bravely fighting cancer. While she was mourning her father, she thought of what he liked most about her: when she was drawing. So she took up the concept of Sangoura again, and she created a tribute to her father. Then she resumed drawing, publishing and going down the streets with a new fury. As a result, she began with a new dedication to creating critical street art.

The extraordinary power of representation

In the times we are going through, creating a space for women to express themselves freely is of utmost importance. It is something that can be achieved through strong women who lead by example and create an environment in which women can resonate with each other. It is about creating an environment where women’s experiences can be expressed and represented even if they are subjects that are considered taboo.

This is something that Sangoura introduced in Tunis and the Tunisian art scene. What is especially striking in her work is that she clashes with absolutely taboo subjects in the streets. The fact that part of her art is displayed on the streets is extremely important, because that is exactly where these previously unheard messages can reach a public that is not necessarily used to them. This is particularly important for women, girls, for whom such a representation of strong and unusual female characters have no precedent. To have a representation of a woman who is strong, who goes out and drinks, an androgynous woman or a woman who has her period is something unprecedented in the street arts in Tunisia. Sangoura also criticized racism and anti-Semitism through her visual messages. It highlights exceptional femininity and unrepresented bodies.

During our conversation, the artist stated that a concept of her is to work on sexist notions in the language of the Tunisian dialect. For example, to say that a woman is brave, that she “has balls” is to say in Tunisian that she has the “roujla”, the male force. So, her idea is to create a new word for “girl power” in the Tunisian dialect: “Al Binsaouiyya”. Because femininity, too, is powerful, and not to be underestimated.

Benny Benz: From The Streets To The International Scene