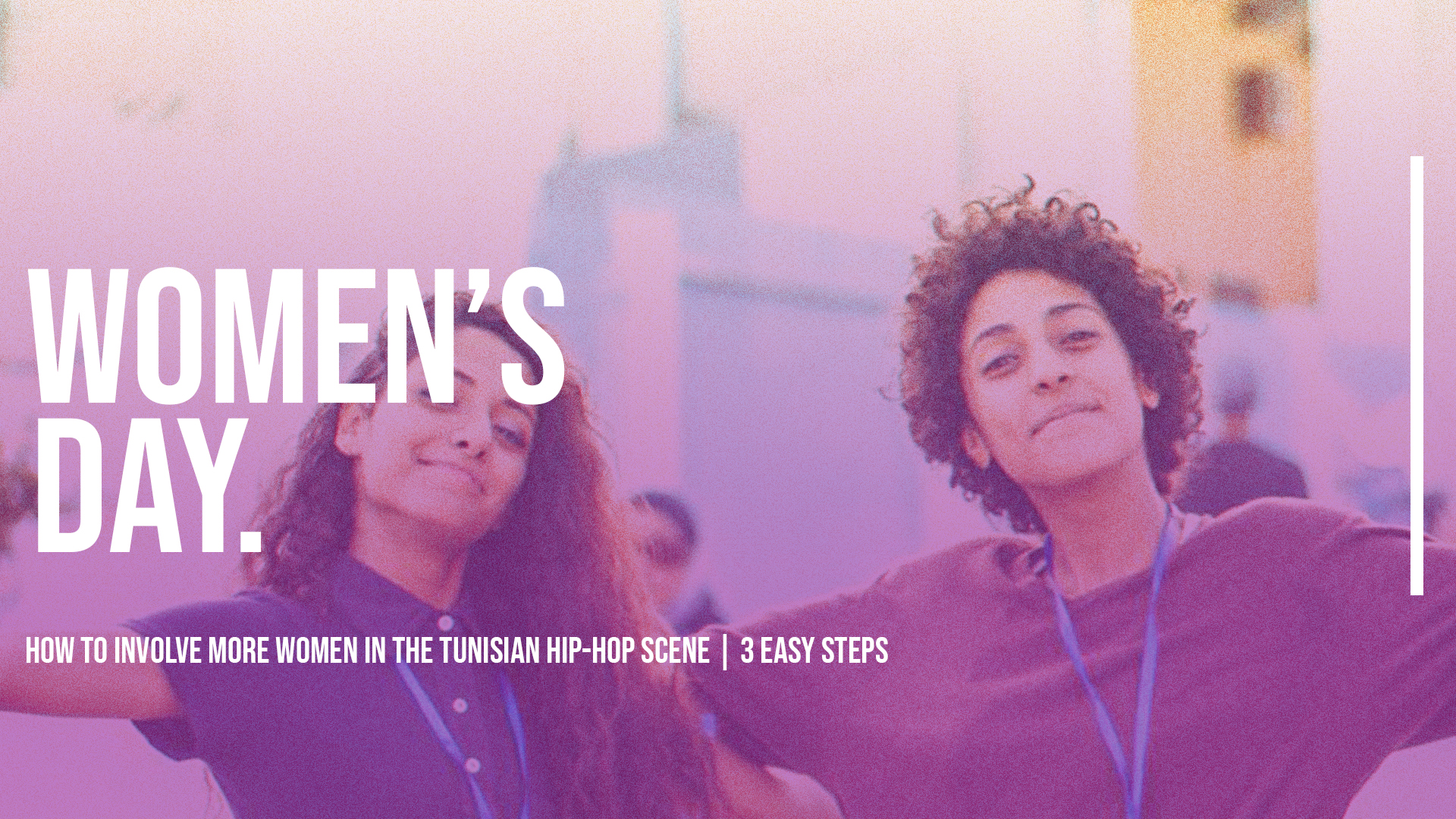 It’s National Women’s Day and it’s the best time to discuss how involved women are in the Tunisian Hip-Hop community.

Women leadership faces many challenges in almost every field in Tunisia. There still are industries that are less affected than others where women can easily fit in every position they decide to pursue.

And since Hip-Hop is known for being a street culture, there are many stereotypes all around it, putting it in a “male-dominated culture” box, making it hard to join by women. There certainly are many women dancers, DJs, Graffiti artists, MCs and beatmakers but we can’t deny how difficult can answering the following questions be: Is gender balance ensured within the Tunisian Hip-Hop scene? How are women Hip-Hop artists represented? Can we spot as many women judges as men during events?

Pointing out the lack of representation of women in Hip-Hop’s local scene is necessary in order for our community to evolve and this includes our movement as well. We might be doing little compared to what we stand for in terms of gender equality but women representation within the Tunisian Hip-Hop scene is something Breakreate cares about and intends to put more work on in the future.

Here are 3 easy steps to guide us through the process of involving more women within our local Hip-Hop community:

Let us begin with actually understanding women. Our community should acknowledge the many challenges faced by women Hip-Hop artists, this goes from family related ones to community linked ones.

I personally believe there are 3 main gaps that should be filled for women to be equally represented: Confidence, freedom and respect.

As stated in The Atlantic, studies at HP proved that women applied for a promotion only when they believed they met 100 percent of the qualifications mentioned on the job description. Men were happy to apply when they thought they could meet 60 percent of the job requirements.

Whether this behavior is determined by fear, a lack of selfesteem or is due to perfectionism, women generally tend to be too hard on themselves than men when deciding about going for a certain opportunity. And I believe that’s the main reason behind seeing few to almost no female dance judges in the Tunisian Hip-Hop dance scene.

Freedom: Should we even discuss this?

Our society tends to act more protective over young girls than boys which hinders girls’ freedom to decide for themselves. Boys will then be exposed to more learning opportunities starting from an early age compared to girls. Such imbalance will surely impact women and men’s future careers as Hip-Hop artists.

The way women are portrayed in Hip-Hop nowadays can make it hard to believe that the core of this culture is far from being disrespectful towards women, making it challenging for them to jump into the movement.

If we ever pay close attention to Hip-Hop crews and collectives, we might notice how Hip-Hop artists tend to build more gender-based connections than knowledge-driven ones.

Creating genuine and respect-based connections will help ensure gender diversity within Hip-Hop collectives and crews while contributing to the community’s growth.

If you are an event organizer, studio owner, a videographer or a writer make sure to dig deeper into our local Hip-Hop scene and promote more women talents.

Gender balance should be everyone’s mission!

Make sure to take a look at these stunning women featured on Breakreate:

South Eagle: From Tunisia to the RedBull BC ONE WORLDS